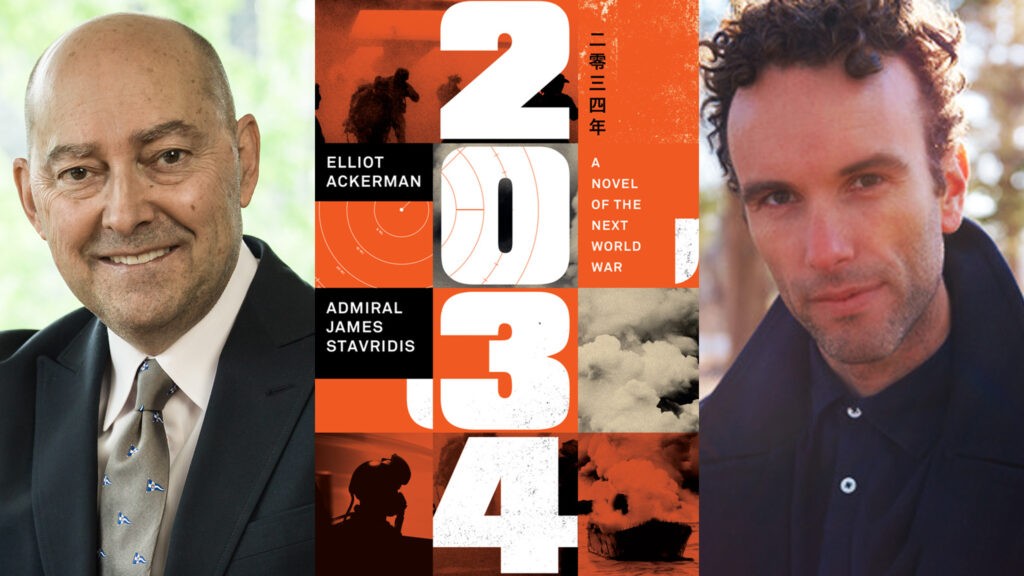 From two former military officers and award-winning authors, a chillingly authentic geopolitical thriller that imagines a naval clash between the US and China in the South China Sea in 2034–and the path from there to a nightmarish global conflagration.

On March 12, 2034, US Navy Commodore Sarah Hunt is on the bridge of her flagship, the guided missile destroyer USS John Paul Jones, conducting a routine freedom of navigation patrol in the South China Sea when her ship detects an unflagged trawler in clear distress, smoke billowing from its bridge. On that same day, US Marine aviator Major Chris “Wedge” Mitchell is flying an F35E Lightning over the Strait of Hormuz, testing a new stealth technology as he flirts with Iranian airspace. By the end of that day, Wedge will be an Iranian prisoner, and Sarah Hunt’s destroyer will lie at the bottom of the sea, sunk by the Chinese Navy. Iran and China have clearly coordinated their moves, which involve the use of powerful new forms of cyber weaponry that render US ships and planes defenseless. In a single day, America’s faith in its military’s strategic pre-eminence is in tatters. A new, terrifying era is at hand.

So begins a disturbingly plausible work of speculative fiction, co-authored by an award-winning novelist and decorated Marine veteran and the former commander of NATO, a legendary admiral who has spent much of his career strategically outmaneuvering America’s most tenacious adversaries. Written with a powerful blend of geopolitical sophistication and human empathy, 2034 takes us inside the minds of a global cast of characters–Americans, Chinese, Iranians, Russians, Indians–as a series of arrogant miscalculations on all sides leads the world into an intensifying international storm. In the end, China and the United States will have paid a staggering cost, one that forever alters the global balance of power.

2034: A Novel of the Next World War is an imaginative extrapolation from present-day facts on the ground combined with the authors’ years working at the highest and most classified levels of national security. Sometimes it takes a brilliant work of fiction to illuminate the most dire of warnings: 2034 is all too close at hand, and this cautionary tale presents the reader a dark yet possible future that we must do all we can to avoid.

Admiral Jim Stavridis, USN (Ret.) spent more than thirty years in the US Navy, rising to the rank of four-star admiral. He was Supreme Allied Commander at NATO and previously commanded US Southern Command, overseeing military operations through Latin America. At sea, he commanded a Navy destroyer, a destroyer squadron, and an aircraft carrier battle group in combat. He holds a PhD from the Fletcher School of Law and Diplomacy at Tufts University, where he recently served five years as dean. He has published eight previous books and hundreds of articles. Admiral Stavridis is Chief International Security and Diplomacy Analyst for NBC News, and a columnist at both Time magazine and Bloomberg Opinion. Based in Washington, D.C., he is an operating executive of the Carlyle Group, an international private equity firm, and chair of the board of counselors of McLarty Associates, an international consulting firm.

ELLIOT ACKERMAN is the author of the novels Red Dress in Black and White, Waiting for Eden, Dark at the Crossing, and Green on Blue, as well as the memoir Places and Names: On War, Revolution, and Returning. His books have been nominated for the National Book Award and the Dayton Literary Peace Prize. He is both a former White House Fellow and Marine, and served five tours of duty in Iraq and Afghanistan, where he received the Silver Star, the Bronze Star for Valor, and the Purple Heart.